THE GO ANY WHERE PADDLE BOARD – THE JOURNEY OF THE “OXYGEN”

In winter 2016 a team of devoted Hatha Paddle Board team members took on the challenge to paddle board in one of the UK’s highest possible SUP locations. After much debate it was decided to go to North Wales and into the Snowdonia National Park.

It was a good clear day but the weather reports were showing a -10 wind chill factor on some of the near by mountain peaks. There are quite a few lakes in this region at varying heights. Some of the smaller lakes are actually know as Tarns, which are much smaller than the common known lake. The Hatha team didn’t want to launch into a large puddle so decided on Lake Llyn Bochlwyd. This is a wild and rugged mountain lake, surrounded by heather clad, boulder strewn slopes. This cannot be reached by road and is only accessible by footpath. The remote lake lies near to Llyn Ogwen in the Glyderau mountain range and stands at an altitude of 555 metres (1821 feet). Llyn Bochlwyd has a surface area of 10.4 acres. The lake is sometimes known as Lake Australia, due to the fact that its shape, when viewed from above. Llyn Bochlwyd offers excellent panoramic views of the Glyderau, Y Garn and the Nant Francon Valley.

The board was packed into its purpose made heavy duty rucksack, complete with shoulder straps, waist strap and roll over Velcro and buckle top. The Bravo pump and full carbon 3 piece paddle slide neatly down the side of the board. Weighing only about 12 kilos it is manageable to carry it for some distance.

One team member bravely volunteered to take the bag up the entire way, as another was still nursing a torn achillies heel injury. The walk from Llyn Ogwen began along the purpose maintained path. As the ground steepened this quickly tapered into open ground and then onto rough mountain terrain. The lake was just below the snowline, frost was visible under foot. It was decided to ingress from the west of the Tryfan part of the Glyderau mountain range. The Tryfan has an elevation of 917.5 m (3,010 ft) which towered over us. We all brought Wetsuits but once at the Lake we talked two members to go into the water just in board shorts.

The board was rolled out and inflated in less than 2-3 minutes. The SUP paddle was clicked together and we were ready to take to the water. As the first brave volunteer was getting changed, screams and cheering was heard from up above. The thick snow on the peaks made it harder to see where our fans were. We didn’t hang about getting changed. Once on the water the chat from the rest of the group seemed to disperse. The only thing that was on your mind was not falling in. Once this passed, your senses opened and the tranquillity of the location was the main focus. The water was crystal clear, the long grass and moss could be clearly seen on the bottom of the lake. The backdrop of the foot of the mountain was super impressive. Just like an infinity pool, the front of the lake seemed to drop off the side of the mountain like a waterfall. This end of the lake gave an endless view down the Ogwen Valley and out towards the sea.

Once the loop around the edge of lake was undertaken, it was time to get out and allow the next victim to take their turn. It didn’t seem that chilly at first but once the adrenaline had left your body the cold took it place. The basic things like untying your mountain boots seemed a challenge. All you could think of was getting back into dry clothes, we weren’t wet it was the fact that we had been standing on the lake for over 20 minutes in nothing but board shorts, mid winter, in the snow with a wind chill factor that only some read about.

The challenged ended well, no one fell in, but we all kind of wished that someone had, would have made a better story. We even went two up on the board at one point, but the fear kept our balance in check. The Oxygen definitely backed up its name, the go anywhere SUP. A good afternoon had by all. And possibly the highest point ever paddled on a paddle board in the UK……… 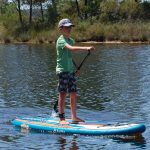